Hashtag of the Week (HOTW): University of Michigan (Week of October 1, 2012) #UMich #UMSocial

The HOTW series has been going on for a couple months now, and has so far focused on all the amazing content coming through Twitter from other places. What about the University of Michigan? Well, as it happens, the University has just recently announced some official hashtags and best practices for tweeting on behalf of UM. Therefore, this week there is not a focus on health or science, but rather on our home, our own University of Michigan. 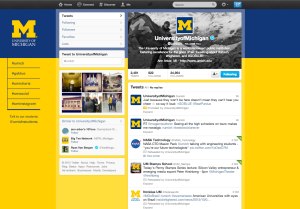 Just to start off, there are currently FIVE official hashtags for use regarding University of Michigan business and activities. Those five, which you can see in the image above, are:

Here are a couple tweets from the announcement of the hashtags, and one with a link to an official blogpost saying how they should be used.

Now for some examples of the sort of things you’ll find in the hashtag streams!

#UMich
Scope: All University of Michigan, all the time.

Are you a #umich hacker? RT @imryantaylor: @umich #hackathon today on north campus…do you have what it takes? @umengineering #haxor

The University of Michigan tribute to Mrs. Betty Ford is on 10/11 at Rackham Auditorium. Details: ow.ly/ee9Pk #umbettyford #umich

#GoBlue
Scope: You can probably guess, but this is mostly about sports.

#UMSocial
Scope: Used mostly by UM persons to discussion best practices and emerging issues for social media, or to alert campus social media experts that this is information you would appreciate them helping to disseminate to the public.

#UMichArts
Scope: About arts and performances on campus or related to UM folk.

You really don’t know what acoustically perfect sounds like until you experience it first hand. #hillturns100 #umicharts

where do you find the block M? #uminstagram@ Michigan Creative instagr.am/p/QX5FU_AVGI/

You may have noticed that some folk are using additional hashtags beyond the most important five, and that some of those appear to be semi-official. These are mostly for special campaigns or events. Here is a very small selection of some of those.

Other Not Official Hashtags Used for UM Business:

#HillTurns100 = For the centenary of Hill Auditorium.

#MHealthy = For health and wellness information and activities provided as outreach or for health literacy promotion through various UM health organizations.

#MTSG = For the “Mind the Science Gap” class taught by Andrew Maynard.

#UMActiveU = For the campus health and wellness initiative.

#UMBettyFord = For the events from the Ford School of Public Policy honoring Betty Ford during her upcoming visit.

#UMHeritage = About University of Michigan history and heritage.

As a general rule of thumb, if creating a hashtag for a UM event, it is a good idea to include the “UM” in the hashtag. That makes the tag tend to stand out to UM alumni, students, faculty and staff, which is usually what you want. You can always contact Jordan Miller, Director of UM Social Media, for advice on selecting an appropriate hashtag.

@umich I was at the 75th anniversary concert with Leonard Bernstein and the Vienna Philharmonic. What an Amaizing venue #hillturns100