Infographic of the Week: Using Social Media as a Crisis Management Tool 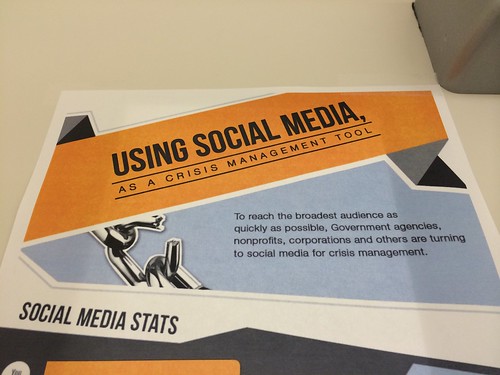 At first I chose this infographic because I loved what it said. I’m a big fan of “SMEM,” a.k.a. “social media emergency management,” so I hoped that putting an infographic about this on my door might get a few folk to read part of it as they went by. Then I did more digging and found it makes a very interesting story.

Last winter, the folks at Emergency Management Degree released an infographic which they had (evidently) hired another company to make. The original infographic is available here:

Unfortunately, while it says who came up with the content, does a lovely job of citing original sources, and names the designers, they neglected to include either a copyright statement, a Creative Commons license, or the date it was made. To verify when it was released, it was necessary to look at blogposts that cited it. This was the earliest one I could find.

The one I found and printed for my door was, however, not the same one. The original infographic was taken by a firm in India, and remade or “jazzed up.” They preserved all the original content in the same sequence (except for the names of the designers), kept a similar color scheme, and made it look different. Frankly, the original one is better designed and the remade one uses a lot of clip art. I don’t know if they were asked to do this for the blog on which I found the redesigned one or if it was their own idea and the blog simply stumbled on it. In any case, everyone links back to the folk who came up with the original content, so it is only the design that changed. Well, and the company from India that remade it added a few typos, probably because English is a second language for them? Here is where I found the redesign a couple weeks ago.

Social Media Makes a Powerful Crisis Management Tool: Infographic shows just how vital a firm grasp of social media is for crisis management / By Jonathan & Erik Bernstein on May 9, 2014 http://managementhelp.org/blogs/crisis-management/2014/05/09/social-media-makes-a-powerful-crisis-management-tool/

And that explains why I have an infographic with typos on my door. You probably want the original, so here it is!