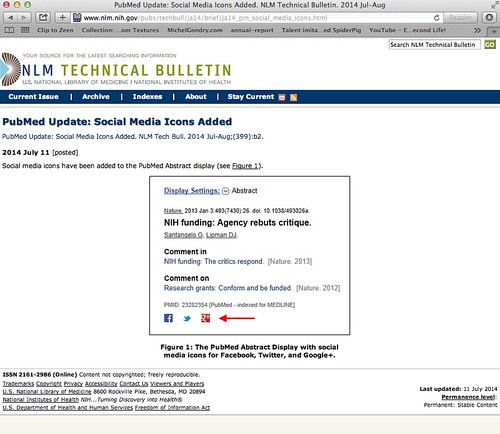 Have you been straddling the fence deciding whether or not social media is “a thing” in healthcare? Well, maybe this will tip the balance. Pubmed now includes social media sharing icons at the article level, as shown in the image above. This is in addition to NIH’s own active life on social media. Unfortunately, when I was testing it out, every now and then what it shared was not the link to the article, but a link to the search strategy from which I found the articles. Hopefully, they’ll get that fixed, but usually it was good. Here’s what it looks like when sharing something to Twitter. 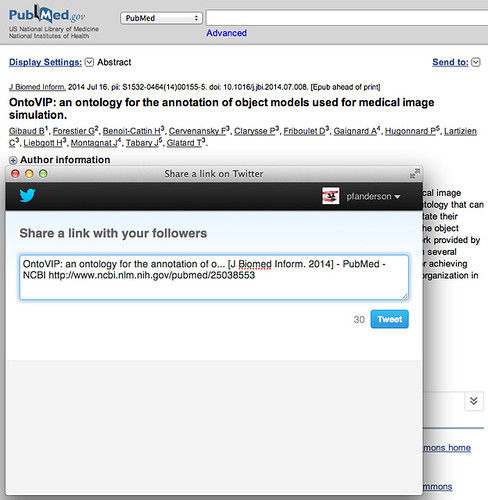 In honor of this noteworthy change, I thought I’d divert from actual hashtags to seeing what people are sharing from Pubmed this week. If you really want hashtags, take a look at what hashtags they are ADDING to the posts, since Pubmed doesn’t automatically add any.

Meta-analysis of Exercise and Bone Mass in males http://t.co/T4UuxZMcg3 #FGSHI2014

Total wrist arthroplasty: A systematic review of the evidence from the last five years. http://t.co/cY9OTGnxIJ #rheum

Generational changes and their impact in the classroom #meded #icre2014 http://t.co/udu1UFK260

We listen but do we hear? The importance of patient stories. http://t.co/L0CiqiRKMq #narrativematters

Delayed Onset of the Jarisch-Herxheimer Reaction in Doxycycline-Treated Disease: A Case Report [Am J Dermatopathol. ] http://t.co/yFyVWgHmly