At the Movies: Male Rape, 10 (or so) Heartbreaking #BreakTheSilence Videos (TRIGGER WARNING) 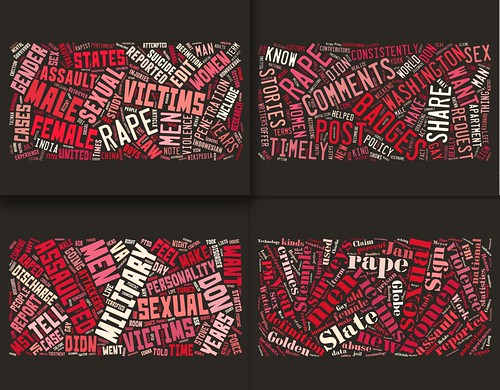 A couple months ago I posted about Mike Tyson’s revelation of having been sexually assaulted as a very young boy, and some related information about male rape and how little is said about it. I didn’t want that to be a one-off, something that is brought up once and then dropped. Social media is becoming a huge tool in creating conversations and safe spaces around difficult topics that have traditionally been avoided. This is one of the most powerful ways in which social media is being applied to changing the world we live in, and it is amazing to observe this ‘unmentionable’ topic (male rape) unfolding through social and popular media.

Several recent events have brought the topic back to mind, rapes, and male rape, and other things we don’t talk about. One was the recent Rolling Stone article about a gang rape at the University of Virginia, and the backlash against it, with implications that the story was improperly researched. Another was the earlier protests on my own campus, here at the University of Michigan, which resulted in official responses from campus leadership.

And then, there is the story that broke recently on Twitter, of male artist Shia LeBeouf being raped in his gallery during an interactive audience participation performance art piece. This was confirmed by collaborators at the show, and has opened even more conversations about what it means for a man to be raped.

A couple weeks ago I stumbled onto some information about a new public health initiative in the United Kingdom trying to bring awareness to this topic. They are using the hashtag #BreakTheSilence, a tag which is used by many advocacy groups, so it is a little confusing, however well intended it might be. The UK government is using so many different social media platforms to get out this message — Facebook, Twitter, Youtube, Flickr, Instagram, Pinterest, Tumblr, and more. I could conjecture why the UK is being more open about male rape than the USA, but that’s irrelevant for this post. The fact is that they are. There is the government initiative, active support groups, multiple television shows that have had episodes on the topic, with the recent inclusion of a male rape plot theme and storyline in the daily soap Hollyoaks, which extended throughout an entire season of the show.

In the United States, male rape is still not talked about except rarely and in sensational ways. Even then, it is pretty uncomfortable and the stories tend to die down quickly in the media. Research studies show, however, that this is far from uncommon, and that the repression of the stories and lack of available ways to talk about make recovery far more difficult for male victims of rape.

We concluded that federal surveys detect a high prevalence of sexual victimization among men—in many circumstances similar to the prevalence found among women. We identified factors that perpetuate misperceptions about men’s sexual victimization: reliance on traditional gender stereotypes, outdated and inconsistent definitions, and methodological sampling biases that exclude inmates. We recommend changes that move beyond regressive gender assumptions, which can harm both women and men. Lara Stemple and Ilan H. Meyer. The Sexual Victimization of Men in America: New Data Challenge Old Assumptions. American Journal of Public Health: June 2014, 104(6):e19-e26. doi: 10.2105/AJPH.2014.301946

But the same conversation needs to happen for men. By portraying sexual violence against men as aberrant, we prevent justice and compound the shame. And the conversation about men doesn’t need to shut down the one about women. “Compassion,” [Stemple] says, “is not a finite resource.” Rosin, Hannah. When Men Are Raped. Slate April 29, 2014.

So, this is a tough topic, even if it needs to be talked about in public. We’re going to ease into this gently, slowly. I’ll give you a bit of info about each video, and you decide if you can watch it. Give them a try, though, and try to understand.

This is the introductory video to the UK government’s Breath the Silence initiative on male rape. The video unfolds through interviews with an actor who portrays a male rape survivor and someone who represents one of the UK support organizations for male rape survivors. It is fairly light on triggers, and intended to get the conversation going.

“Evidence suggests that 12% of all rape victims are men. Yet we know it is common for men not to come forward or to take years to report being a victim because they fear not being believed, feel alone and worry people will blame them for what’s happened.”

The same video is also available from Survivors Manchester.

In the BreakTheSilence video, the actor was from the UK-based television show Hollyoaks. Hollyoaks spent over a year in research, preparing to integrate homophobic bullying and male rape into the show’s storyline. They collaborated with male rape survivor advocacy organizations in planning and writing the script, and the actors worked with them to try to make the story believable. While male rape has appeared in popular media before, it was usually included primarily for shock value and to emphasize brutality. This is the first time I’m aware of that presented the topic as a realistic real-world event, something that happens (even if off camera), and which also shows the recovery, support system, and works through the healing process. In this video, it is an interview with the actors, interspersed with a view extremely brief snippets from the show’s footage, closing with the importance of the conversation being taken up by fans in social media as part of making this something that can be talked about.

A couple other relatively mild videos with excerpts related to the Hollyoaks rape story. (If you want the full episode, dig around in Youtube, and you’ll probably find it, depending on what country you live in.)

Presented as a music video, snippets are included from Episode 153 of another UK show, The Bill, themed around police stories. In this episode, a man suffers flashbacks to childhood sexual abuse from a coach.

(4) Why Rape Is Sincerely Hilarious

Whoa, whoa, take a minute and calm down. Yes, the title sounds inflammatory and insensitive. It isn’t. This video opens to a black screen and a young man, saying, “Hi, my name is Will, and I sincerely think that rape is hilarious.” He seems happy, quirky, smiling, laughing. The screen never changes, and the young man stays on screen straight through the very short video. The video closes with the same young man, still smiling, still laughing, but flushed, red, clenching his jaw as he forces himself to keep smiling, and with tears in his eyes, saying, “And that’s why I sincerely think that rape is hilarious. Because I have to.” His story is worth listening to.

This is a sweet video. A cute young woman in a darling dress and with excellent makeup was filmed sitting by her Christmas tree. It’s all rather lovely. But what she says is what’s important. She talks through a script with research and statistics. She puts the whole script in the video comments with live links to the excellent resources she identified (which is the real reason I selected her video). She correctly calls out people who are trying to shame Shia LeBeouf as setting a bad example for other victims of male rape. It’s not the world’s best video, but she’s right.

Prison rape is a serious issue, and often overlooked in statistics and studies of male rape. This video tells the sad story of an innocent sent to prison for a minor crime, being raped, terrified, victimized, and then using his own experience to try to change the system to protect others. I love the comment towards the end to the effect that until you can guarantee safety and the opportunity to improve self-esteem, it is really hard to change people for the better.

An educational video from the Service Assisting Male Survivors of Sexual Assault (Australia). This video is relatively non-triggering, as an audio interview of a woman, Rachel, from a support organization for men who’ve been raped by other men. The discussion includes how to tell if your son may have been raped, how pedophiles groom entire families to gain access to one child, that adult men can be rape victims, the role of sexual violence against men as an act of war, adult recovery from childhood victimization, and much more. Highly informational, almost no images.

Recent years have seen a dramatic increase in the incidence and reporting of what is becoming known as military rape, mostly against women. It does happen to men, also, although people have sometimes trouble believing it. Protect Our Defenders is an organization that has as its mission to help deal with the issue of military rape. This video allows a Navy veteran to tell the story of his victimization and bullying, and how he ended up accepting a dishonorable discharge to escape.

“The odd thing about it, though, is children are made aware of rape, male on female rape, all of their lives. They never hear about female or male on male.”

Intended as a resource for therapy groups, this video includes conversations with five male survivors of sexual abuse. It illustrates some of the range of what can happen, the vulnerabilities of men and boys. It talks more coherently about the longterm psychological impacts these events can have on a person.

In the war and violence going on in the Congo, rape has become a common tactic to control and demoralize people, to keep them from fighting back. The statistics reported in this video state that approximately 40% of all women and 24% of all men have suffered sexual trauma and/or violence. The stories coming from this area are exceptionally brutal. In the highlighted video, there is a brief interview with a survivor and a longer interview with a doctor about the need for support and treatment for male victims of sexual violence.

This entry was posted in Science2.0/Health2.0 and tagged at the movies, gender, rape, sexual violence. Bookmark the permalink.

6 responses to “At the Movies: Male Rape, 10 (or so) Heartbreaking #BreakTheSilence Videos (TRIGGER WARNING)”