Blue is for Borgs (On WAAD), Let’s Walk in Red Instead 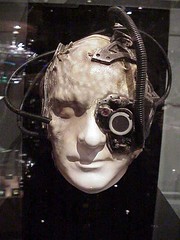 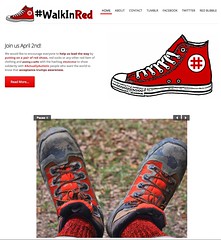 It happens every year now. I end up having a gentle, delicate but firm conversation with someone (individual or organizational representative) who really, REALLY want to do something to be supportive and help people with autism, and to do so they have jumped on the bandwagon of the “Light it up Blue” movement founded by Autism Speaks. They mean well, but they don’t realize the broader context. 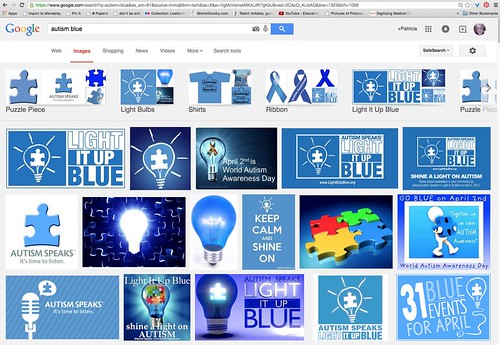 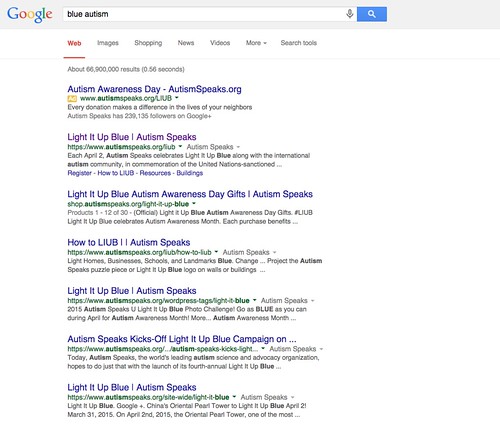 When the context is provided, they either say, “I didn’t know,” or “Don’t we get brownie points for good intentions?” or “Well, it might mean that for you, but not for us,” or “That’s only true in America,” or “It’s too late, we already committed.” The folk who say, “I didn’t know” are usually actually listening, and will make a change in the future. I’m not so sure about the others. I’ve written letters to companies that are “going blue” and collecting funds to donate, trying to make them more deeply aware of the impact. There are companies where I no longer shop, and have told them why. Not that it really has any significant impact, from what I can tell. And I’m afraid that each complaint, like this one, ends up instead feeding the adoption of the campaign, creating free publicity, and feeding negative messages about autism that lie at the heart of what Autism Speaks does. 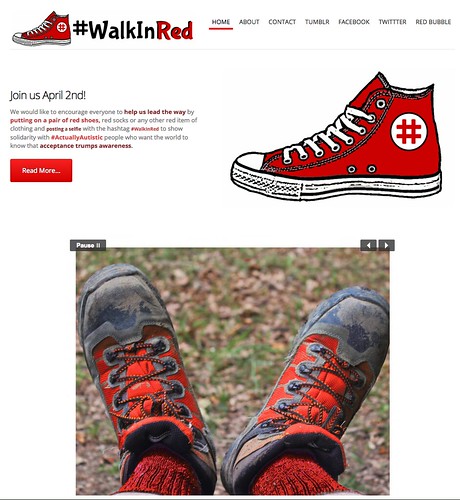 You see that autism advocacy has a long and strong history, before and after the first efforts by Autism Speaks. What has happened with the Autism Speaks efforts is basically that they have, well, co-opted the idea of the World Autism Day for awareness and fundraising of their own projects. I’m serious. Here, look at some definitions of the word “co-opt.”

Free Dictionary: co-opt
“1. to choose as a member.
2. to assimilate or win over into a larger group.
3. to appropriate as one’s own; preempt.”
“3. To take or assume for one’s own use; appropriate: co-opted the criticism by embracing it.
4. To neutralize or win over (an independent minority, for example) through assimilation into an established group or culture: co-opt rebels by giving them positions of authority.”

Merriam-Webster: co-opt
“: to cause or force (someone or something) to become part of your group, movement, etc.
: to use or take control of (something) for your own purposes”
“2 a : to take into a group (as a faction, movement, or culture) : absorb, assimilate
b : take over, appropriate (a style co–opted by advertisers)”

Autism Speaks have a LOT of money behind them, connected with a lot of famous folk, and have built that into such a strong brand recognition that when you search for Autism Day in Google, you have to actually scroll way down to find the links to the United Nations, the folk who are REALLY behind it. All of the top leading links about it are for Autism Speaks and their fundraising efforts. 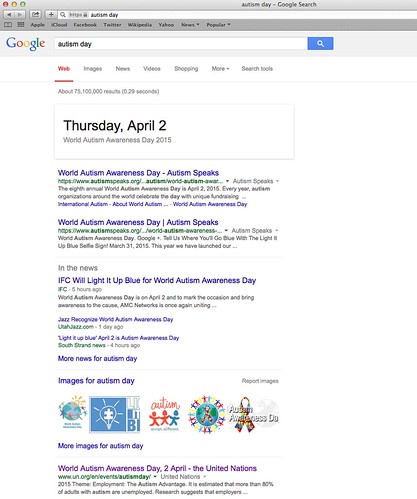 Whoa. And again, WHOA. And the whole thing with “Blue”? That was to match the Autism Speaks logo. Yes really. So, even if people aren’t aware of it, even if they’ve forgotten, every time someone connects “blue” with “autism” they are creating more support and awareness for the organization Autism Speaks, their fundraising campaigns, their marketing, and their agendas.

Is that such a bad thing? After all, they are a charity, and the money still all goes to support people with autism, right? Wrong.

Not to say that Autism Speaks do nothing worthwhile (some of their Toolkits are genuinely useful), it is the organization’s underlying tenants are viewed with alarm within the larger autism advocacy community, who don’t necessarily have the millions of dollars to get eyes on their ideas. Here is a tiny selection illustrating some of those concerns.

Autistic Self Advocacy Network (ASAN): 2014 Joint Letter to the Sponsors of Autism Speaks

John Elder Robison: I resign my roles at Autism Speaks

Forbes: Why Autism Speaks Doesn’t Speak For Me

The Daily Beast: “Autism Speaks”- but Should Everyone Listen?

The controversial and contentious dialog seems to center on these issues.

Now, let me go back to the beginning of this post. The Borg. What the community of autism advocates is seeking is to celebrate their skills, talents, uniqueness. The United Nations theme for World Autism Day this year focuses on the value of persons with autism as employees (click on the word “inclusion” above). This has also been celebrated recently by the Wall Street Journal and Entrepreneur. In its long history, the autism advocacy movement quickly shifted from simple “awareness” to more active and joyful celebrations of the value of persons with autism. I’ve been tracking the Autism Speaks controversy for a very long time. I don’t need to explain here how what they do tends instead to undermine those happier and loftier goals.

I do have a personal stake in this. My son has autism. My brother has autism. There are some who think I have autism and was just never diagnosed. I wouldn’t be surprised. Last time I was home, I rescued this beautiful piece of blown glass made by my autistic brother, who was preparing to discard it as not meeting his standards. It wasn’t good enough. I love it, treasure it, and keep it in my office where I see it everyday. 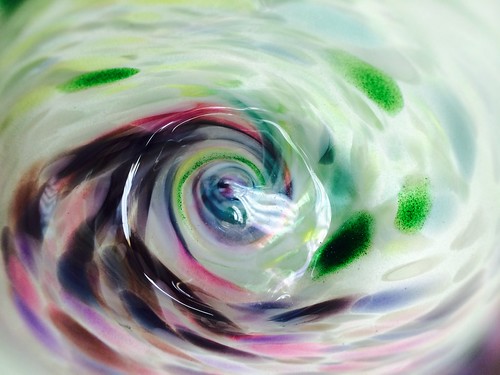 Also last time I was home, the pastor of my brother’s church made a point of telling me how important and highly valued he is in their faith community. I don’t want to hear anyone tell either my brother or my son that they aren’t good enough, or that they need to be assimilated. I have many friends who are on the autism spectrum. Some of them are even non-verbal, with what is considered severe autism. I tell you, when my friend who is non-verbal is complaining on Twitter about something her husband said to her, knowing that she couldn’t argue back … well, let’s just say, I don’t think of her as being non-verbal.

What is it that we want of people with autism? Do we want to treasure them and celebrate their uniqueness? Or …

“We are the Borg. Lower your shields and surrender your ships. We will add your biological and technological distinctiveness to our own. Your culture will adapt to service us. Resistance is futile. … You will be assimilated.”

If you still think of “blue” as the color of autism, you may not even be aware how it happened, but you have already been assimilated.

MORE ON THE RHETORIC OF AUTISM

Autism and Rhetoric (a Prezi synthesizing the high points of the Heiler & Yergeau article).
https://prezi.com/kz2mvlhp-7gz/autism-and-rhetoric/

Emily Malabey. How the Rhetoric of Autism Speaks Has Hurt Autistic People. Council for Autism and Neurodiversity November 15, 2013. http://www.autismcouncil.org/?p=2802

PF Anderson. Beyond “Light it Up Blue” — Maybe “Light it up Gold”! https://etechlib.wordpress.com/2014/04/02/beyond-light-it-up-blue-maybe-light-it-up-gold/
(Check out the Storify of Ibby Grace presenting on this)