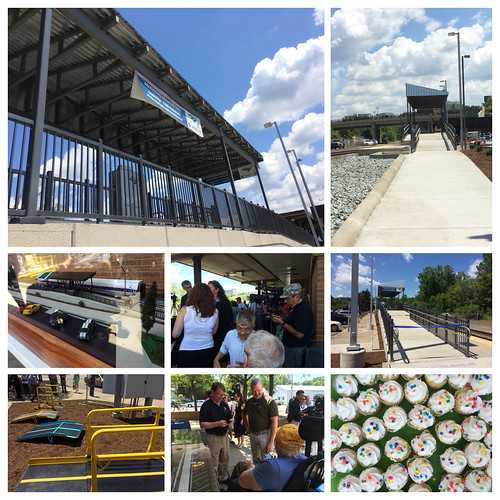 To continue the series on “what I did for #ADA25,” I’d like to talk about the very exciting event here in town last week, in which Ann Arbor sets the stage for a national high speed rail system, and access for persons with disability is at the core of making this possible. 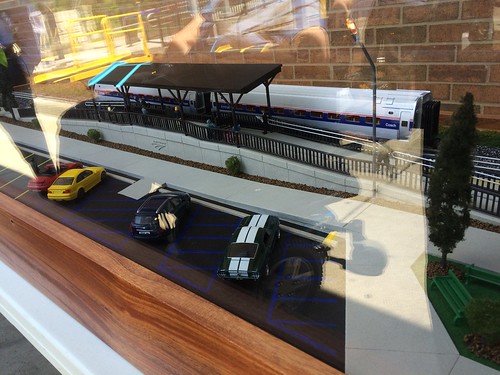 The event was the ribbon cutting for the new disability-accessible platform at the Ann Arbor Amtrak station.

The event started out with the mayor, Chris Taylor, describing the importance of the University of Michigan Health System and hospitals in providing advanced health care to the residents of the State of Michigan, and how critical accessible rail transport is for supporting this.

Richard Bernstein, Judge of the Michigan Supreme Court, waxed eloquent, clearly joyful and delighted with this innovation. You can hear his full remarks on Soundcloud.

Joe McHugh (Amtrak’s Senior Vice President) described this as “the flagship of our new technology,” continuing with the vision and possibilities that would come from this.

Joe really meant technology, too! The new boarding platform is retractable, and extends toward the train when in use. The Amtrak press release describes it as “The platform mechanically extends toward the train, bridging the gap created when a level-boarding platform is needed. This next generation of passenger-focused technology will allow America’s Railroad® to deliver a modern passenger railroad that is accessible to all.” That wasn’t the limit of the tech, either. In addition to designing the platform, the interactive portions of the tech, they also had to design manual tech to support the process in case of problems with the automated portions or for situations that require special extra support. 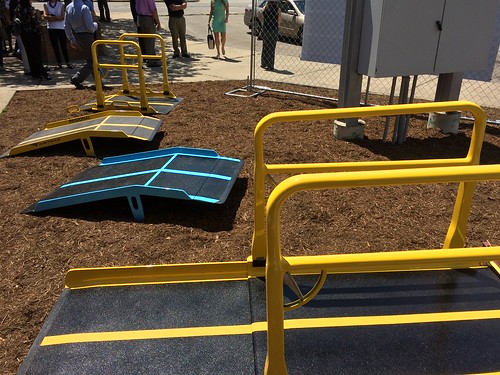 As with all ribbon-cutting events, the actual story started long long before. Or stories, I should say. This event sprang from the intersection of many stories, many people’s experiences. There are the local folk who fought for a better way to take the train, and helped make people aware of the reasons why it should start HERE. There were wheelchair passengers who complained about being put on a jack, hoisted into mid-air, and left dangling in the rain while the station staff try to get the logistics sorted out. There were the Amtrak staff who helped people with luggage, moms with strollers, elderly folk climbing the narrow stairs into or out of the Amtrak cars.

The story that resonated most powerfully with me was told by Richard Devylder, the U.S. DOT’s Senior Advisor for Accessible Transportation. 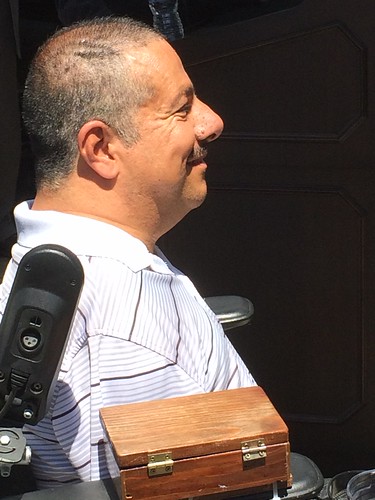 Richard was born without arms or legs. The combination of his experience, his intelligence, his connections with the community of persons with disabilities all help to inform his position and influence change. And when the opportunity presents itself, he absolutely will go for the brass ring.

That’s kind of what happened one day a few years ago. Richard described a room full of transportation higher ups. He asked, “Well, do you want to see high speed rail in the United States?” Yes, yes, yes, they all did. The next thing Richard said? “Then you have to find a way to let people like me board the train in less than 15 minutes.” BOOM.

That was one story. He had another good one. Richard described one day when he was trying to get on the train, and a ramp had been set up to allow him to board. But he couldn’t even get on the ramp because it was so crowded with people. Elderly with walkers. Parents with strollers. People with heavy rolling bags of luggage. Part of him thought, “Hey, why are all these people blocking my ramp?” Immediately he realized it is because all of them also needed a ramp, and the one provided for him was the only one there. BOOM #2!

We need ramps for boarding trains absolutely as much as we need curb cuts. The next ADA25 story I’ll be telling is about a group of people in virtual worlds. They were pretty impressed when I told them about this new Amtrak platform. Then they asked, “But why did it take 25 years? And why is there only ONE in the entire United States?” More on that in the next post.

The actual ribbon cutting, with Gary Talbot as the honored local person who pushed the hardest to make this happen.

And then people could board! 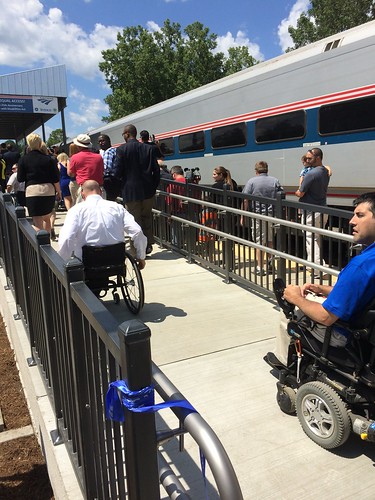 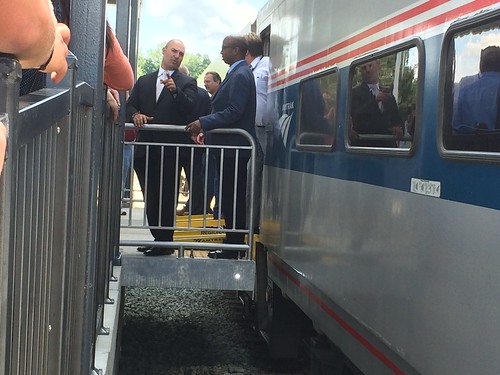 Updated to include Gary Talbot’s name.