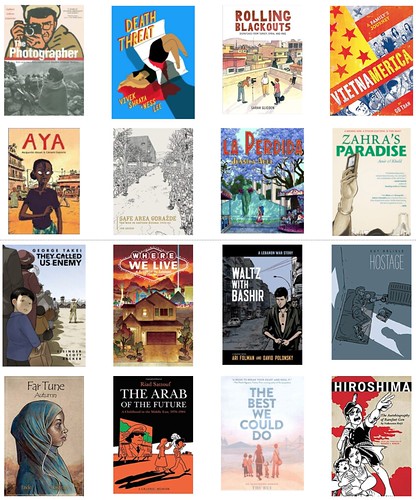 One of the debates in the Graphic Medicine community is whether or not social justice titles actually count. Some folk include them because they embody issues around what is currently referred to as “social determinants of health” or because they are of interest to the specific community they serve, while others suggest that with limited budgets and space, we should really focus on comics that explicitly touch directly on health, healthcare, and medicine. There’s a range, and for me, I tend to throw out a broad and inclusive net. Graphic novels and graphic memoirs which touch on social justice themes often can be of great value in empathy building or can serve as touchstones for challenging conversations around issues of access, inclusion, equity, and related topics as they touch on healthcare.

Today, the #medlibs Twitter chat focused on social justice. More on that.

Check this out (quick rough draft) on Wakelet – Critical Medical Librarianship, a Joint Twitter Chat with #MedLibs and #CritLib https://t.co/sMlRmIBxSu via @wakelet

Yesterday was the ALA webinar, “Libraries, Comics, & Superheroes of Color.” More on that.

Check this out on Wakelet – Libraries, Comics, & Superheroes of Color #libcomix https://t.co/erMNyG43s1 via @wakelet

Do you get the impression these ideas have been on my radar recently?

A couple weeks ago, Jeff Edelstein and I were asked for suggestions of graphic novels and graphic medicine titles along themes of social justice and global scholarship. I promised to collect our suggestions in a blogpost, so we can find them more easily in the future. Here we go!

The list of titles is alphabetical. The links for the titles are not to places you can buy them, but to reviews of the books. I tried to select the reviews from a variety of quirky and interesting places where you might want to browse to find more information on graphic novels or comics or social justice. Some of the books are about recent history or current events, others are more distant history. Some of them may not strike you immediately as ‘social justice’ but they all carry social justice elements and themes. I tried to select some which are well known and others which are not as well known. The purpose of the entire list is to try to direct you from this selected list to a vastly broader world of similar books out there waiting to be discovered. Trust me, there’s a lot more where these came from, and more stories waiting to emerge and waiting to be told. There are more links to extra resources at the end of the post.

Resources from the University of Michigan

Brave in the Attempt: SOCIAL JUSTICE LEARNING WITH THE X-MEN AND OTHER GRAPHIC NOVELS

Bustle: 10 Graphic Novels Written By Activists That You Need To Read Now More Than Ever

Huffington Post: 10 Compelling Graphic Memoirs that Will Make You a Devoted Fan of the Genre

Paste: Beyond March: 10 Other Graphic Novels That Confront Prejudice

Tales from the Nerdy: Disabled or Mislabeled: Comics and Graphic Novels About Disabilities Bibliography

WE: The need for diversity in comic books

This entry was posted in Education, Medical Humanities. Bookmark the permalink.