I’ve been making good progress, I think. I attended a wonderful online conference during the weekend, but needed time off afterwards. Sunday I tried to take a proper walk, which you already heard about, but I think I was still a tad mentally foggy and should have made that post for two days. But Tuesday, I walked around the block feeling as if I’d been let off a leash. I felt GLORIOUS. Better than 100%! It was wonderful, and it lasted, oh, about six hours. LOL!

I haven’t had any actually CLINICAL symptoms in days now, and have returned to my usual flu-season regime of one ColdEeze a day. No more sore throats, no more tight chest, no fever, no cough, no night sweats, no dizziness, no more sense of fighting through a fog. I feel more myself during the days, but I find I’m starting to yawn a lot later in the day, and I hit a wall by the end of the normal work day. So, not quite 100%. I told my boss I was 98%, but honestly, that’s only as long as I sit still and don’t move. I’m much more comfortable in my house and body than I was a week ago. When I hit a wall, though, I start chilling again.

I had a fun moment the first day I actually felt normal for a bit. I found the CDC’s Coronavirus Self-Checker. Part of the reason I wasn’t tested was because I didn’t have the scarier respiratory symptoms. I was told to self-quarantine with the assumption that I probably have it, and to contact them if I got worse. But “worse” was defined as the respiratory symptoms getting worse or the fever getting really high, and neither of those happened. What happened for me was extreme chilling, with sticky cold skin, weakness, fatigue, dizziness, brain fog. My son had to help me stand up if I wanted to go the bathroom. He had to make all the food. He had to hold my cup of hot drink if I was trying to move. I couldn’t walk and hold the cup. My fingers were so cold they were stiff, and this was indoors with my son running around in his t-shirt and me wearing five layers and wrapped in a blanket. I couldn’t walk without holding onto him. My toes ached from the cold. I just shivered and shivered all day. And then at night, I’d sweat. So when I ran the CDC Self-Checker and they asked about sets of symptoms, and I saw one for me, I first felt really validated. And then I laughed, a little weak puffy chuckle. Because their tool implied that maybe I had been sicker than I thought I was. 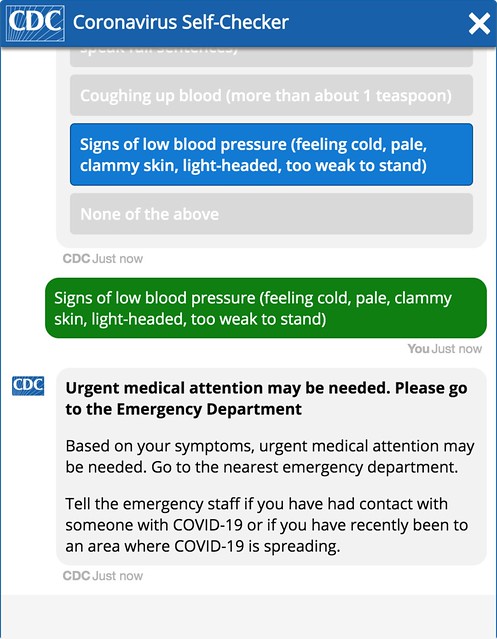 Still, I made it fine, at home, and what I’m hearing from most of my health care provider friends is that you REALLY don’t want to go into the hospital if you can possibly avoid it. If you can possibly recover at home, stay home. And that’s what I did. And it worked, for me. Anyway, when I start chilling now, I don’t think this is the virus anymore, I just think it’s my body being overextended and worn out, and it’s usually only for a short time. The chilling isn’t attached to weakness or sweats anymore, it’s just feeling cold. It stops when I lay down. And that’s why I haven’t been getting these posts done. I’ve been pushing myself too hard, and I keep thinking I can do this later, because it will be easy. And then it isn’t. I’ve been trying to write this for three days now. Maybe I’ll finish it today.

By evening, it’s all I can do to lay down and let my son make dinner. I haven’t had veggies in weeks because he doesn’t do veggies, and that will surely contribute to my fatigue, so I took a break for lunch a couple days ago and threw a bunch of greens, beans, sweet potatoes, onions, garlic, potatoes and black rice in a pot and made some sort of vegetable slop. Let’s just say I’m not actually cooking up to my usual specs either. I’m a really lovely cook, and going out to eat is usually a step down. Right now, not so much. My tastebuds are still shot, probably from all the ColdEeze, so maybe my cooking is fine and I just can’t taste things? Also, I stocked up really well, as usual, and we’ve done fine at home with the food I already had, but we’re getting to the point where we need to replenish a few perishables, eggs most of all. It’s been three weeks, after all. I’ve been trying for days to get a delivery slot for groceries, and that just isn’t happening.

As someone in the high-risk category without a CONFIRMED case of COVID-19, I really shouldn’t be out anyway. Or should I? You see, without a confirmed case, you are in an awkward situation. You get all of the joys of being sick and having been sick, without the benefit of presumed immunity from knowing you had the thing everyone is avoiding. You have to both act as if you might be highly contagious while also following guidelines for being at risk of getting it again. And the guidelines from the CDC and the doctors aren’t terribly helpful. Friends from Asia have been pointing me to research articles showing that some people still show viral shedding up to 37 days after the onset of symptoms, but they don’t have a clue as to whether that virus is active and infectious or not. There is confusion about whether this is different or the same for those with more severe cases or with mild cases.

The doctors here tell me they can only follow the CDC’s recommendations, and according to those, it’s perfectly safe for me to be out and about. But is it? Am I safe for others to be around? Is it safe for me? I’m not sure. Some folk have already said they are kind of freaked out to hear I went outside and walked around the block, with no one closer to me than across the street. One one hand, I know they are over-reacting, but on the other hand, what we know is so ephemeral and fluid right now. If nothing else, this is an exquisite illustration of the way science works ALL THE TIME. Science is always fluid, and scientists largely acknowledge that much of what we “know” depends on the last piece of research and may shift with the next piece. The general public thinks of science more along the lines of grade school true/false tests, with a definite hard-and-fast forever truth. Nope. That’s not science. That’s a myth or a religion wrapped in science-themed gift paper to make it easier to accept. Real science is messy, and changes.

[SIDEBAR: Sometimes science communicators use the analogy of an onion’s rings, which really doesn’t work for me. The idea is that science has core precepts that other scientists tried to disprove over and over, and couldn’t. Those are the center ideas that don’t change, the ideas that we would tend to have on those grade school T/F quizzes. The rest of the science moves outward from that, and the further out the less sure we are, the more vibrant and likely to change things are, the adventures and excitement of scientific discovery live at these far edges. But with onions, the vibrant life is push out of the center, and it is the edges that are dry and static, so I have mixed feelings about this analogy.]

For now, given that I haven’t had a sign of a fever in almost a week, and tomorrow morning it will be a solid three weeks since I first got sick, I’m calling this part done. This will be (I hope) the last post about my personal experience with this. I’ll do another collecting some links to other people’s experiences, because I’m only one person, and my experience may not be typical, so I want you to have some others for comparison. Part of the problem right now is the information being shared is all about what happens to the folk who get seriously ill, and there just isn’t enough about the mild cases, what that experience looks like, what recovery feels like. There are stories about people who are sure their case is mild, and wait too long to get help. There are stories about the people who go in, and are sent home, and the going in makes them worse. There are stories, lots and lots of stories, about people who had some mysterious long lasting virus that was too early to be COVID-19, or before we were doing testing here, and whose symptoms maybe were more like mine than what was the expectation at the time. There are stories from healthcare providers saying to themselves, is this what I’ve been seeing all winter, and I just didn’t know what it was? We don’t know much. So I hope my sharing my story is useful (I’ve been told it is), and I’ll continue to share some COVID-19 info here, but I’m hoping to get back to more of the regularly scheduled programming.

This entry was posted in Undiagnosed and tagged covid19. Bookmark the permalink.