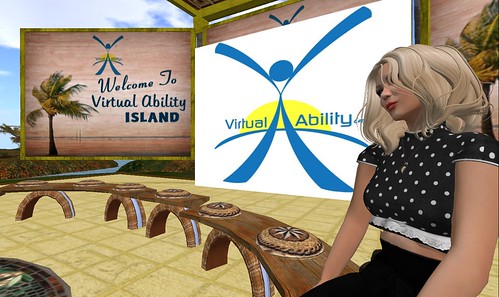 The first post in this series focused on the White House’s #ADA25 celebration and how high tech can sometimes lead to high touch, improvement of quality of life and connections. In the second post, the focus shifted from the national to the hyper-local, with the new Amtrak technology innovation in Ann Arbor that we hope will impact on rail accessibility nationwide. In this third post, I’d like to introduce you to Virtual Ability, a virtual world space that is home to a global community of persons with all kinds of disabilities

Virtual Ability, Inc. (VAI) has, throughout their existence, facilitated access to resources and training for persons with disabilities around the world. This includes personal one-on-one support as well as informational, educational, advocacy and awareness events for their audience. These events engage an international community around disability advocacy. Naturally, the 25th anniversary of the signing of the United States’ Americans with Disabilities Act was not overlooked, with related activities planned for the weeks before and after the actual date. Because of the international nature of their community, events are often scheduled twice, to enable access from different hemispheres. 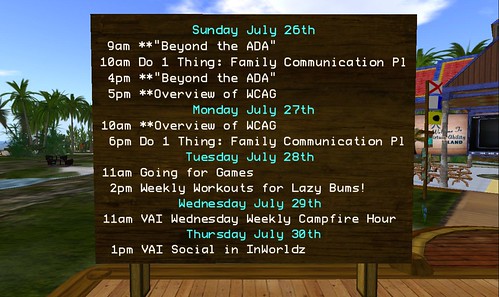 Because of the complex range of disabilities supported within their community, information and presentations for their events are offered in text and audio, to support those with or without hearing as well as those with or without sight. This is standard practice for them, and a model that clearly should be adopted for webinars and livestreams and other multimedia online events. What can I say? VAI is ahead of the curve, and committed to doing it right if at all possible. FYI, they used to offer a consulting and testing service to advise organizations providing online content, and providing access to a group of engaged testers with a wide range of access challenges. Very, very valuable.

The VAI events and conversations were hosted and moderated by Gentle Heron, who also provided the voiceover for presentations provided in text. 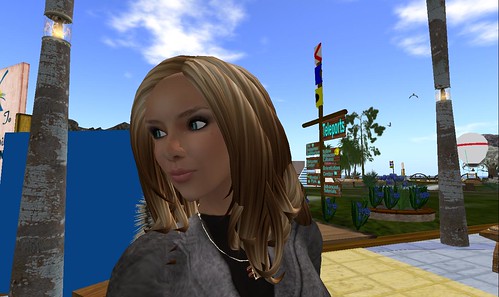 For the actual day of the anniversary, VAI offered four events. Two were showings of videos about the ADA then(1) and now(2), with community conversations about them; the other two were formal presentations, one about strategies and resources for personal disaster and crisis preparations (which I hope to blog about as a separate post), and another about the bare bones basics of what persons with disabilities can and should expect (and REQUEST) for accessibility for online content from organizations in the United States, how this varies globally, and why there aren’t any such guidelines for virtual world online content. This last was basically a user’s guide to WCAG, the first presentation I’ve seen like this. Most WCAG presentations are for web developers, instructing them on what to do. It is rare to see a presentation for persons with disabilities explicitly on what WCAG means for them.

The question that came up over and over through the day’s events was, “Are we done yet? What’s left?” It’s been 25 years, we’ve come a long ways, but there is still a lot left that needs to happen for true equality and access. Me, in real life, I was listening to these conversations sitting on my couch wearing a t-shirt that said, “Disability Rights ARE Civil Rights.” 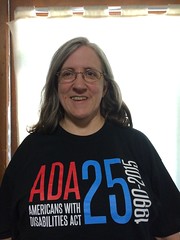 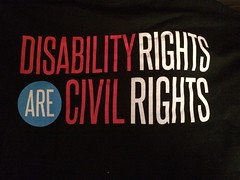 The conversation was urgent, engaged, informed, and educational. People talked about the need for more accessible modes of transit; new technologies that may help the homebound get out into public life (especially exoskeletons and the Rewalk System, examples of persons with disabilities in leadership roles that influence policy for others; how the United States leadership in disability rights has influenced access and expectations in other countries; the looming cuts to social security income (SSDI) for persons with disability, and the potential impacts (“Many of us are foregoing meds already”). Ironically, the topic of foregoing meds appeared the next day in one of my Twitter chats.

T2b: Spoke to cabbie in Indy; Mother stopped diabetes medication due to cost; Passed due to complications #healthcare #fail #bioethx

This post focused on #ADA25 in virtual worlds in part because this powerful way of using technology to build community remains drastically undervalued and overlooked. That doesn’t mean there aren’t other ways in which online social spaces are being used to create community, support, and opportunity around these issues. Just take a look at #spoonies, #SpoonieChat, #a11y, #AXSchat, and the #ADA25 hashtag itself. Many of the same issues and concepts brought up in the VAI conversations and events were echoed in the Easter Seals #ADA25 Twitter chat, #ADAtoday.

What progress can be made 25 years from now? Twitter chat on #disability rights: http://t.co/FLeVbfCNEq #ADA25 pic.twitter.com/feByGyOFDC

#TBT in honor Sunday's 25th anniversary of the passage of the ADA #ADA25 #ADAToday #EqualFooting pic.twitter.com/gwMZTNjl5C

If any of this intrigues you about the potential for how virtual worlds, online environments, and related technologies can support individuals and communities with disabilities, you might want to also take a look at this recent video describing the VAI community.

“One Simple Question” A History of Helping #UMSSD40

I’ve been wishing Storfiy embeds would work in this blog, but having to make do, and will share them here anyway, however awkwardly. So, here’s the first one I am sharing.

Last week Jane Vincent gave a wonderful presentation on the history and evolution of assistive technology and other resources on the University of Michigan campus for students with disabilities. The presentation was the kickoff for a year of wonderful events celebrating the 40th anniversary of Services for Students with Disabilities on campus.

Jane was a student during some of the early stages of getting this really off the ground, and now she is a leading point person for assistive technology information and access on campus. Along the way, she’s known most of the wonderful good hearted folk who have been working in this area here.

Jane shared her slides, but spoke for a long time on each slide, so the slides can only begin the process of providing insight and telling the story.

I live-tweeted the presentation, only catching a few of the high points. I was delighted that the tweeting capture the interest of people beyond UM, even engaging one of my favorite authors, Jacqueline Lichtenberg. The video will be available later, but in the meantime, check out the Storify for more information.

[View the story “One Simple Question #UMSSD40” on Storify]

Following up on yesterday’s post about International Women’s Day, I spent all week tracking the many different hashtags being used on Twitter to discuss this day and the events and initiatives associated with it this year. In addition to International Women’s Day, this week also included the annual day to End the R-Word, and the incredibly innovative all-in-ASL episode of the popular television drama, Switched at Birth. All three of these are important to various substantial but marginalized communities, and show the power of social media and the Internet to create awareness and include the voices of those who may not otherwise have a strong voice in shaping culture or policy.

Join us on Wednesday March 6th from 6-8 pm in the Wilkie Auditorium and help end the demeaning use of the #Rword! twitter.com/ASAatIU/status…

The End the R-Word campaign was unusual in that it only had one hashtag in common use. They’ve been doing this for several years now, and have succeeded in gathering a diverse range of voices with a unified message — to stop using hurtful language, specifically the word “retarded” as a general term.

Your tweets have made this campaign a huge success! THANK YOU to our 15,000 followers for helping put an end to the #Rword

Stopping The R-word Is Not Enough: Culture — Not Just Language — Must Change huff.to/13uQGTK via @huffpostimpact #Rword #Inclusion

If you haven’t seen it, Switched at Birth tells the story of two families, one wealthy and one less privileged, who discover their teen daughters were switched at birth. The child from the less well-off family is deaf, and much of the show includes subplots and scenes developed around deaf culture. The deaf community and other fans of the show went all out this week with efforts to make this special episode of the show trend on Twitter to help raise awareness around deaf concerns and culture. Part of what made that succeed was connecting the episode to the Occupy Wall Street movement with the theme “Take Back Carlton”, with Carlton being the local School for the Deaf.

u all want to learn sign language? Watch next weeks #AllASLEpisode#SwitchedatBirth IT has captions & so beautiful!! youtube.com/watch?v=fxerHj…

I hear 100 kids at @gallaudet got together to watch last night’s #allaslepisode of #switchedatbirth. That’s pretty cool.

“@takebackcarlt0n: What did you guys think of Bays masterpiece for the #TakeBackCarlton? twitter.com/TakeBackCarlt0…” Looks amazing!

Without all the angry screaming, a protest just looks like a flash mob. #AllSilentSwitchedatBirth #TakeBackCarlton

since the switched at birth is all signing i cant look away from the screen to text! haha #SwitchedAtBirth #AllASL

With women being the largest of these three marginalized communities, and with over a century behind this specific event, it is perhaps no surprise that International Women’s Day shows the largest number of spinoff events, well developed issues, and the greatest diversity of hashtags used around the conversation. Irina mentioned two hashtags in her post — #WHM and #WMNhist. Those stand for Women’s History Month and Women’s History. Closely aligned with these is #RWHP which today stands for Radical Women’s History Project, but usually stands for Rural Women’s Health Project.

3/6/1870: Wyoming allows women on juries; the right was later taken away until the 1950s, when women again admitted to serve. #RWHP #wmnhist

Meanwhile, the actual official hashtags for International Women’s Day are #IWD2013 and #IWD13, with many also using the simpler #IWD, #WomensDay or just #Women.

On International Women’s Day, who is most important woman in history of mental health? I’d say Melanie Klein. #IWD13 twitter.com/ProfLAppleby/s…

The Google Africa page is having an International Women’s Day Hangout at 12:45p UTC about Women Who Inspire: goo.gl/tLo5u #IWD

It is only to be expected that issues of women’s health and violence against women surface today as highlights of the conversations around International Women’s Day, with increased calls for awareness and support. The hashtags for violence against women today include these: #EndVAW; #VAW; #timetoact; #sayucommit. The hashtags for women’s health include #WomensHealth and #SRHR (for Sexual and Reproductive Health Rights).

Ethicist Arthur Caplan has thoughts about the limits of surrogacy in creating familiesow.ly/ixoQH #fertility #womenshealth

Every minute, a young woman is infected with HIV – see this UNAIDS infographic for more info unaids.org/en/resources/i… #SRHR

Related strongly to the health conversations is the broader #GenderEquality, which includes some phenomenal content.

Did you know the #EU has had a #genderequality strategy since 2010? Find out more:ec.europa.eu/justice/gender…

I could go on for days with the hashtags for IWD. Instead of embedding many more tweets, I will instead share additional hashtags and hope that you can find time to explore them yourself. There are several conferences, events, and organizations actively engaged in extending the reach of IWD.

Among the initiatives and special releases for International Women’s Day are included a number of film and music events celebrating the rights of girls and women. Here are some of the hashtags being used, but if you want the free music or to view the films, you’ll have to go look.