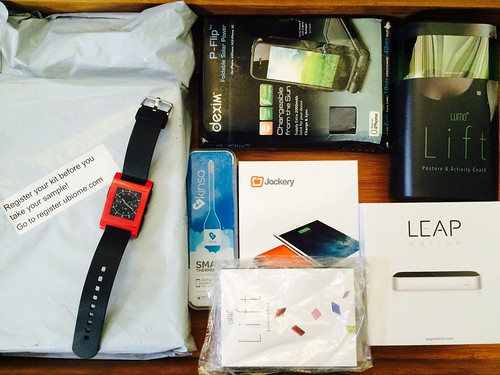 Last week, I felt really lucky that I was able to make it to the first Quantified Self Meetup of the New Year (thanks to Nancy Gilby for the ride!). This session was held at the UMSI Entrepreneurship Center. Roughly ten folk came, and I’m not sharing names even though they said I could because I’m not sure I got the names down right. The group included a wide range of types of people: corporate folk, students, entrepreneurs, faculty, alumni, and independents. The conversation was fast, dynamic, and overlapping, so I couldn’t catch everything. I will talk about what I did catch of the IDEAS and the GADGETS. That’s what’s really fun, eh?

What the Meetup group page SAYS they are interested in (as a sampling) is pretty extensive.

What’s even more interesting is what people said they were interested in as they went around the table.

The “legal advice” bit? That was from someone planning a wearable tech start up. They got some interesting answers on that point: Scott Olson, of UM’s Pediatric Device Consortium; SPARK; Medical Innovation Center, Fast Forward Medical Innovation, and (depending on your UM affiliation) possibly the Student Legal Services, UM’s Startup Law Clinic (Twitter), Zell Lurie Institute.

For the personal genomics, it was a great surprise to me to meet another person who knows their MTHFR status (and who also has two defective copies of the gene, AND is working on problem solving as hard as I am)! We were swapping info, apps, diet tips and tricks, formulations of supplements, and more. There just wasn’t enough time to dig as deeply into this as I wished. I did get to do my now normal rant, “23andMe was NOT killed off!”

After introductions, we just had an open conversation, much of which touched on challenges in quantified self tools. This was what had the meeting stretching WAY past the planned time!

Any one of these could easily be a devoted session, presentation, or series of blogposts. The bit about failure especially interested me. The idea was that these devices seem to be being designed to fail, as is pretty standard for tech in general these days. But what happens to the end user if they get to the point where they trust the wearable tech device, trust its data, and can’t tell that it has stopped working properly or is on the verge of failure? The FDA keeps tabs on what happens with medical device failures in their MAUDE database. The problem is that this only applies to devices that go through FDA approval, and most of the wearable tech devices folk use for biohacking or self-tracking personal health information, well, they are not FDA approved. People were talking about how much risk is there, impacts, and devices that are low risk. I shared a story of a time when a blood pressure cuff lead to a fatality some decades ago. That was pretty shocking to them, because we tend to think of blood pressure cuffs as being pretty innocuous. How did it happen? It failed during surgery, and kept giving normal readings when the patient was actually having trouble. The idea was that even simple tech can have serious impacts when the stakes are high and people are depending on it.

Of course, we all had to talk about our toys, how we like them or don’t, what we’d change, what we’re thinking about buying, our experiences with customer service from the different companies, companies that are failing or expanding, new releases, etc. I tried to keep a list of devices mentioned or waved around (not all of which were pertinent to QS), but I’m pretty sure I missed a few. The same is true of services, apps, and such, but I’ll give links for the ones I caught.

While most of the gadgets mentioned were in the room and functional, that wasn’t true across the board. Some of these were mentioned as warnings (“a glorified pedometer” “gave me headaches” “out of business”), so please don’t take this list as an endorsement.

The apps here include tools for mobile and desktop, for data analysis, self-tracking, behavior modification, communities, and time management / lifehacking. What isn’t included is the conversation about low-tech alternatives, such as replacing calorie counting apps with photos of what you ate, or using notebooks instead of tracking apps. Quantified self doesn’t have to take a lot of money and gadgets (but perhaps that should be a separate post).

Please note that this is NOT a collection of the best ever anywhere resources on Quantified Self, but rather (as with all the other lists in this post) a collection of what was mentioned during the meeting.

Last but not least, I collected a whole bunch of links I stumbled on during the meeting in one large “OneTab” collection. It includes 76 web pages that I wanted to come back to, reflecting more details or random conversation digressions. You can find it here: http://www.one-tab.com/page/EKdC99v0Q2-nZYfOm41lOw.

There were many Twitter tags and events last week that I really wanted to profile (and I hope there is time in the future to come back to some of the others!). The reason this topic won out over the others is because I participated in TWO events that focused on this question! One was the University of Michigan Pediatric Grand Rounds (#umpedsgr), with guest speaker Alex Djuricich, MD.

Excited to be livetweeting @medpedsdoctor on emerging tech for #umpedsgr pic.twitter.com/x1F3ZO7cxa

You can see a Storify of the complete Twitter stream from the talk here: Emerging Technology in Medicine: Friend or Foe?.

Alex launched his presentation with a case study of a young man with high blood pressure who comes to the clinic with his iPhone and app, wanting to share his data on his blood pressure trends.

Case: 16yo male, >BP, non obese, … using devices for #QS what do you tell family? #umpedsgr A: Ask for more info on device.

Alex also got most of the audience livetweeting, which turns out to be what he’s used to at Indiana University, where they’ve livetweeted grand rounds for the past two years at #iupedsgrrounds.

He started with that case, branched out to include some discussion of types of tech that track or capture data about patients, and then swung back to the original case. Here are a few tweets from that talk.

1 in 5 Americans use technology to track their health. #quantifiedself #UMPedsGR

Healthcare Gamification: Is it Time for Physicians to Prescribe Gaming to Patients? https://t.co/0kM5nQLS9o #umpedsgr

Back to the case study of #QS patient: Test patient's device against tech in clinic, do readings match? #umpedsgr

I was absolutely blown away when the same idea came up last night at the weekly #HCSM chat.

TOPIC 1 – Given how much data can be self-tracked: how are HCPs dealing w/ pt-tracked data? Pts, how are you presenting data to HCPs? #hcsm

This conversation was incredibly powerful. Clinicians and patients going back and forth, examples of data and tools, best practices, and more. These are just a very few of the tweets, with more archived in Symplur.

A1: Data that can be self-tracked? I'm not sure how this would even work. New data such as…..? #hcsm

T1 My favorite example is in diabetes: in type 2 diabetes, self-monitoring glucose has equivocal benefit, and may reduce QoL. #hcsm

T1 Key to self-tracked data is it must be actionable and relevant. Pts can collect lots of data that HCP's can't do much with. #hcsm

A1 patients trying to self track is a good thing. Will help with medical literacy rates I hope. #hcsm

@TwiceDiabetes There will be some measures (e.g. glucose in T1) where self-monitoring directs care: need to find those situations. #hcsm

@RichmondDoc Understand equivocal outcomes. Need to review research, although I suspect from my own self tracking: wrong questions. #hcsm

@TwiceDiabetes agree, and collaboration between dr and pt can help find the best things to self track #hcsm

Living the quantified self: the realities of self-tracking for health http://t.co/tO3JQxs9eZ #hcsm

Right now all that self-tracking data is information, I think bigger problem is how to process, how to talk about it, what to do, etc. #hcsm

T1 idea of tracking IMO also has ties to #mindfulness; northeast culture very fast speed, not used to being mindful of self #hcsm

@RasuShrestha The question for me is if increased pt self-tracked data = increased patient engagement. Not sure they're equivalent. #hcsm

@YinkaVidal I agree with @richmonddoc – many reasons: lack of will, lack of training, lack of time, lack of motivation/evidence. #hcsm

I feel sometimes doctors are almost upset with patients who want an active role in their care, seek to understand by asking questions. #hcsm

We can say I don't know, then look up. RT @pfanderson: @danamlewis The doc I have now says, "I don't know much about this, but I'll learn."

The conversation continued far past these thoughts, including challenges integrating data into electronic health records, balance between access to data points and ease of use for clinicians, training issues, how to integrate n=1 “trials” with population-based data, and much more. Truly a chat worth reading through in its entirely.