Sunday night I participated in a very interesting chat on Twitter. It was part of the #SPSM chat, which stands for Suicide Prevention and Social Media. The chat was about an experience I had last summer. To make it overly brief, I ended up in an extended conversation with a suicidal person through an anonymous social media service, and I didn’t know what to do, how to do, or even whether to do anything. At that time, I was curious, and explored social media posts that state suicidal ideation or intent on several platforms, such as Facebook, Twitter, Pinterest, and so forth. Pinterest tended to say, “So CUTE I want to die” (with a few boards collecting sad stories). On Google Plus the results for “want to die” mostly brought up posts about animals in shelters scheduled for euthanasia. There were a few on each of Facebook and Twitter, but they tended to be mostly people using the phrase lightly for purposes of emphasis and drama, and more important, they rarely if ever show up in a normal Twitter stream. You have to go out explicitly hunting for them, as I did for this screenshot. 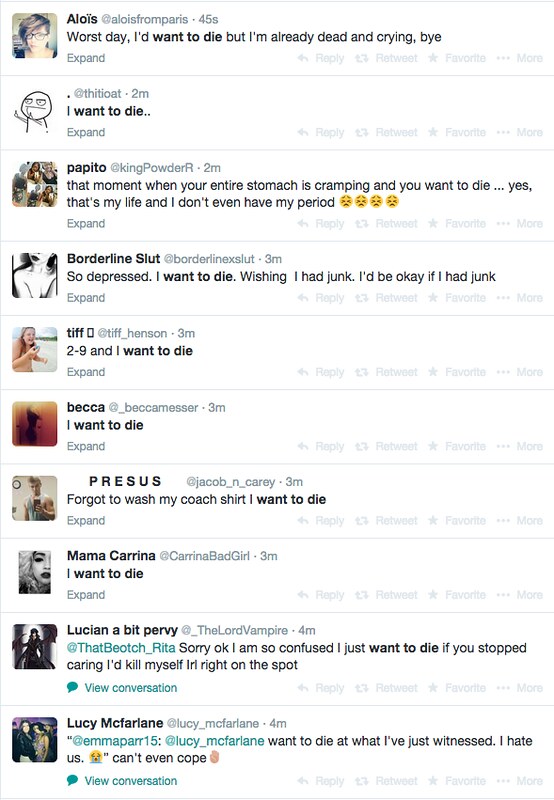 Once you shift over to the anonymous social media services, like Post-Secret, Secret, 6 Billion Secrets, and Whisper, it’s a different story. You can hardly turn around without tripping over a post that expresses some sort of suicidal thoughts or other emotional trauma, or worse, posts fantasizing about hurting other people. When I check Whisper, I’ll often see posts like those at the head of this blogpost, with timestamps of “1 minute ago” “46 seconds ago” and so on. The vulnerable posts can elicit comments ranging from heartfelt support to vicious attacks, which is a bit part of why the creator of Post-Secret shut down that app. My experience came on Whisper. Here are a couple other links showing some Whisper content.

In last night’s Twitter chat, some of the issues that came up included:
– challenges with the ethical underpinnings of anonymous social media services;
– challenges on anonymous services to find out where the person is, gender, other identifiers for rescuers;
– the idea that calling 911 for help for a person is a breach of community standards (like ‘narcing’ in drug culture);
– geographic challenges in locating assistance when the person is in a different country;
– different cultural standards for appropriate response to suicidal intent;
– legal challenges when the service refuses to identify the anonymous suicidal user except to police in the country of origin for the service (and not in the country of residence for the suicidal person);
– and much more.

Here are some of the tweets from last night’s chat.

Briefly, she DID attempt suicide. Her GF got her to hospital at same time I was trying to contact hotline. #spsm

T3 @PFAnderson @Atoes84 On anonymous SoMe platforms, how do you get info re #suicide poster so you can call for help? Should you? #SPSM

@SPSMChat @Atoes84 The person has to reveal something. On Whisper you can turn location content on and off. She had it turned on. #spsm

T2 @PFAnderson @Atoes84 What if you suspect the #suicide post is insincere, trolling, or "for attention/" What if it's not? #mhsm

T2: in need of attention for a number of reasons. Don't assume others will act. @SPSMChat @pfanderson #SPSM

US hotline INSISTED that I call 911. So I did. Got the local police department in Michigan. They'd no idea what to do about prob in UK #spsm

T2: too often others assume this as well or will mock/troll the person themselves. @SPSMChat @pfanderson #SPSM

T3: Ask the person directly. Share your care and concern for their wellbeing. @SPSMChat @pfanderson #SPSM

T3: How long can they keep themselves safe for? Let them know those intense feelings can and often do pass @SPSMChat @pfanderson #SPSM

T4: Encourage them to connect with their safety contacts or consider who they do trust to talk with. #SPSM @SPSMChat @pfanderson

In "old days" of IRC chat like undernet, were semi-permanent ops who could react and contact other ops in the region to call emgy # #SPSM

I've seen similar Whispers, though, and read the conversations that followed – many disagree on calling 911, considered "ratting out." #spsm

Is there a way to reach out that doesn't infringe on people's privacy or civil liberties? People shrug about police concerns, but … #spsm

@DocForeman @AboutSuicide So many laws and guidelines haven't caught up with SoMe yet. Vanguard of change! #spsm

With so much of chat being international, perhaps time for a way to call the local emergency number or crisis line from abroad #SPSM

Given the international and semi permanent community of practice that #SPSM represents, maybe *this* is the network to start with?

T5 @PFAnderson @Atoes84 When do you give up helping a #suicidal poster? When is it OK to walk away? When do you stop trying? #SPSM

@pfanderson @DocForeman So how would you train people who are going to find themselves in the situation you were in on social media? #SPSM

@mloxton @pfanderson I'm so glad PF shared this experience. A LOT to think about and learn from it. #SPSM