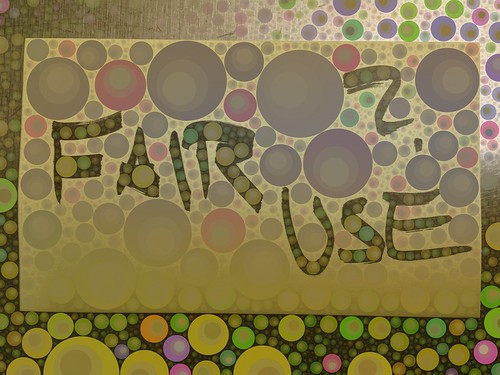 In part one of this post on using research tables and figures in social media, the focus was on, “Let’s find something that isn’t copyrighted, and just use that, because we know that will be safe” (sort of). But sometimes what you want is new, not old, and from a copyrighted publication, not something open access. When that happens, what do you do? Can you still use it?

It started with Andrew’s question, but he sure isn’t the only person asking!

Is sharing/embedding a figure from a paywalled scientific journal on Twitter really OK? #copyright #scicomm http://t.co/4acmnNfdxp

#lazyweb, copyright ? for presentation- do I need to clear use of an figure in an article w/owner (author or journal)? Unsure…

@WxDeFlitch its a violation of copyright law and twitter terms of service to publish images you dont have license to. we require permission

Have learnt new term, ‘freebooting’ – seems to be an acceptable way to saying ‘that breaks copyright’ http://t.co/R1DPyVhuq2

The answer is (again) it depends. And, to be honest about it, the “it depends” is a whole lot messier. The idea of “fair use” makes the idea of “copyright” look like child’s play. As usual, I am not a lawyer (IANAL), so take the information here at your own peril, and don’t go quoting me to your own lawyers. That said, I’ll be giving references to a lot of information that IS from lawyers, so refer people to the original sources whenever possible!

This is a question that comes up a lot. Even more often, I suspect, it doesn’t come up at all when it ought to, because someone assumed it was alright and didn’t think about it more deeply. I may have even done that myself (and I’m afraid to go back and look too closely at my blogposts).

WHY ARE FIGURES DIFFERENT?

The shortest version I’ve found explaining why “fair use” for research figures from articles are DIFFERENT from other images is this snippet from Scholarly Publishing @ MIT Libraries:

“Note: an image or figure would commonly be considered a work in and of itself, weighing against fair use; or could summarize the key point of an article, also weighing against fair use.” Reuse of figures, images, and other content in theses http://libraries.mit.edu/scholarly/publishing/copyright-publishing-guide-for-students/reuse-of-figures-images-and-other-content-in-theses/

That’s the gist of it. Applying “fair use” to reusing content from a larger work depends on four factors:

The point from MIT regards the 3rd factor, “amount and substantiality.” If the image is considered a work independent of the article, then copying it is copying a complete work instead of a percentage, and that is not OK. If the figure is considered a fair distillation of the complete article, then that could be considered equivalent to copying the whole article. To be allowed to use something under “Fair Use” claims, it is recommended to meet all FOUR of the four factors: no money, factual or data-focused content, a tiny bit of it (insignificant amount), and little to no impact on sales of the original. If any of those are iffy, you’ve got a problem.

In a recently published article in the research journal CIRCULATION, the editors of the journal attempted a randomized controlled trial to test the success or failure of social media in promoting readership of articles. How did they do this? Well, they posted randomly selected articles to Facebook and Twitter, but a bit part of how they posted included (you guessed it!) FIGURES. For exactly the same reasons we are NOT supposed to use them, technically speaking.

“However, our social media postings were comprehensive in that they focused on the main message of the article and included a key figure from the article. Thus, it is possible that social media users did not find it necessary to access the full article and therefore experienced increased awareness of the article but not online access of the primary source. This raises the possible concern that social media could reduce the potential reach of original published research as demonstrated by altmetrics.” Fox CS, Bonaca MA, Ryan JJ, Massaro JM, Barry K, Loscalzo J. A Randomized Trial of Social Media From Circulation. Circulation 2015; 131: 28-33. http://circ.ahajournals.org/content/131/1/28.full

In that test, it was the editors of the journal posting the figures, and even then, they questioned the utility and benefit. A big part of the question, which they highlight in that snippet, was whether it is better to have awareness of the article and its findings, or actual readers. This assumes that people who click through to the article actually read it, which is itself questionable.

So, that’s the short view. Just to round it out, here are a few more pieces relating to this topic.

WHAT IF I DRAW MY OWN FIGURE?

A common recommendation is to redraw the figure. Annoying, time-consuming, but supposedly legal, most of the time, as long as the content is primarily data (since data can’t be copyrighted). Indeed, this is recommended by many experts as THE solution to this problem.

Q: I want to use a figure from another thesis or dissertation from my group. Do I need to ask permission?
A: “Usually. The student who wrote the thesis or dissertation owns the copyright and must be asked for permission. Figures are generally considered works in and of themselves and do not usually constitute a small portion of the work. See “How to Use Copyrighted Materials” for more information. If, however, the figure is a simple representation of data, you may not need permission. Data cannot be copyrighted, so non-creative ways of representing the data are generally considered fair use.” Copyright Frequently Asked Questions | Michigan Tech Graduate School http://www.mtu.edu/gradschool/administration/academics/thesis-dissertation/copyright/faq/

It depends on who you ask, though. I don’t know the court law on this, but I’ve found recommendations on both sides. Overwhelmingly, what I’ve found it people recommending to redraw the figure. And then I found this, from the Association for Computing Machinery (ACM).

“Redrawing a figure does not change the Fair Use analysis; the figure cannot be used without permission just because it is redrawn.” ACM Guidance for Authors on Fair Use http://www.acm.org/publications/guidance-for-authors-on-fair-use

WHAT IF I JUST GO AHEAD AND USE IT? NO ONE WILL CARE, RIGHT?

Another common approach (probably the one I am most guilty of myself) is to assume that you aren’t important enough to bother with, or that no one will notice you did it, or that if they do notice all that will happen is they ask you to take it out. I haven’t even attempted to figure out how often this happens. The gist of the idea is that, while it may not be strictly legal, it IS fairly common practice, and can be a win-win for each side (as long as you are saying nice things, anyway).

“Most authors will probably be happy that their results are disseminated, and reuse is likely to lead to more people reading the full paper and citing the work.”
Martin Fenner. Why can’t I reuse these tables and figures? Gobbledygook (PLoS Blogs) 2010.
http://blogs.plos.org/mfenner/2010/09/30/why-cant-i-reuse-these-tables-and-figures/

“Posting figures from papers “was something we all did, all the science blogs, and I had been doing it since I started the blog. I always thought I was doing a public service, I wasn’t plagiarizing or claiming it was my own data.”” Andrea Gawrylewski. For blogger: A threat, then an apology. The Scientist May 2, 2007. http://www.the-scientist.com/?articles.view/articleNo/25066/title/For-blogger–A-threat–then-an-apology/

So, it’s fine, right? Uh, not so much. If you are doing this on a work related blog or for your organization, it is awfully risky, since they can be held liable, which is a real can of worms. If you are only doing this on your personal blog, and it is made clear that these are your words and actions and not to reflect on your employer, … it’s your decision.

WHAT IF THEY PULL OUT THE BIG GUNS?

There are publishers who have (or will) pull out the big guns. Yes, usually, even if they notice, they’ll just ask you to take it down, to “cease and desist,” but there is no guarantee. The best known case in science blogging of use of a figure gone wrong actually centered around a PhD student here at the University of Michigan, Shelley Batts, back in 2007.

“When Shelley Batts wrote up a report on an article about antioxidants in fruits, she never expected to get contacted by the copyright police, but that’s exactly what happened.” Munger, Dave. Is reprinting a figure fair use? http://scienceblogs.com/cognitivedaily/2007/04/26/is-reprinting-a-figure-fair-us/

“In short, I was threatened with legal action if I didn’t take it down immediately. I used a panel a figure, and a chart, from over 10+ figures in the paper. I cited and reported everything straight forwardly. I would think they’d be happy to get the press. But alas, no.” Batts, Shelley. When Fair Use Isn’t Fair. http://scienceblogs.com/retrospectacle/2007/04/25/when-fair-use-isnt-fair-1/

The blogosphere went WILD. Some of the issues brought up included that this was government funded research paid for by taxes; the “amount used” argument (since it was such a small fraction, not even a complete image); the stifling impact on science discourse; the chilling of public awareness and policy discussions; and heavily, the critical distinction between “fair use” and being granted permission.

“First, the blogger Batts did not go through the usual process to request permissions to use published material in advance. It is not clear that had this been done that she would have been refused and indeed permission may eventually be extended. … Of course, once the appropriately senior person at Wiley was involved, the situation was resolved. This is not a “win”. This is a “loss” …” DrugMonkey. “This figure is reproduced with permission of the publisher.” https://drugmonkey.wordpress.com/2007/04/26/this-figure-is-reproduced-with-permission-of-the-publisher/

It is easy to find posts about this, but the one that seems to have really tipped the balance was when BoingBoing stepped in.

“This is, of course, bullshit. Reproducing part of a figure in a critical, scholarly essay is so obviously fair use that it hardly bears discussion. Wiley’s lawyers know this. You and I know it too.” Doctorow, Cory. Wiley threatens scientists with copyright law – UPDATED. http://boingboing.net/2007/04/26/wiley-threatens-scie.html

Eventually, it all calmed down, when Shelley was “granted permission” to use the image by the publisher. Many expressed concern that this ended up muddying the waters, that this was and should have been respected as fair use, that the publisher should have acknowledged this was fair use, and that granting permission implies that permission was theirs to grant (permission that is irrelevant in the case of fair use). Shelley was happy – she wasn’t getting sued, and her original blogpost was able to stay (although I can’t find it now, and I don’t know why).

“I was so surprised that anyone would think I was doing science a disservice. Science blogs bring pedantic ‘ivory tower’ knowledge to a completely new audience that would probably never hear about it otherwise. But in the end, I’m glad it happened — and that the entire blogosphere howled.”
Moments in Medicine at Michigan, Summer 2007. http://medicineatmichigan.org/magazine/2007/summer/moments

But the University of Michigan lawyers stated that she had done nothing wrong to begin with. So. Clear as mud, eh?

“Maybe if we weren’t so worried about copyright, we’d be able to report on more research.” Dave Munger, op cit.

This entry was posted in Enterprise, Research and tagged copyright, fair use, figures, images, intellectual property, Research. Bookmark the permalink.