UM Plays a Part in National News Around #CerebralPalsySwagger — Hashtags of the Week (HOTW): (Week of June 9, 2014) 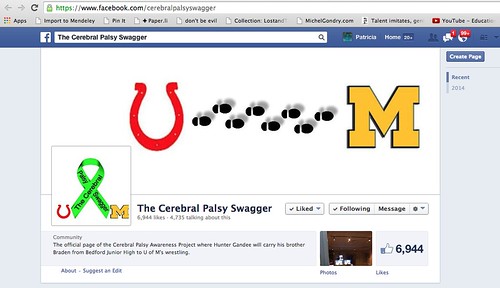 It doesn’t happen that often that a Twitter hashtag about health blows up into a national news story, and even less often that this will happen with an event hinged around the University of Michigan! Many thanks to my colleague Anna Schnitzer for bringing this to my attention, and please excuse us if this post is a little more “feel good” than usual. The story is about two brothers, Hunter and Braden Gandee, who went on a journey last weekend to raise awareness about cerebral palsy. 7-yr-old Braden was carried by his 14-yr-old brother, Hunter, for 40 miles, from the Michigan-Ohio border to the University of Michigan Bahna Wrestling Center in Ann Arbor. The news loved it, beginning with local stories (M-Go Blue, and MLive), then taking off across the US, from the Detroit Free Press to Fox News, NBC News, People Magazine, the Today Show, and even ESPN and Canada! And here comes the buzz from Twitter (mostly pictures, with reactions from real people around the country).

Good luck to Hunter & Braden Gandee, who have started their 40-mile trek to Bahna! Our Chris Heald is joining them. pic.twitter.com/mNPZxS1weh

A 14-year-old wrestler has trained for weeks to carry his brother 40 miles to raise awareness for cerebral palsy: http://t.co/MmOWmizJlT

Braden made this sign to inspire his brother Hunter, who carried him 40 miles #CerebralPalsySwagger pic.twitter.com/cJwhUr6b6b

@HunterGandee is one of the best big brothers ever to the awesome and hilarious Braden Gandee, who has Cerebral Palsy. #cerebralpalsyswagger

@HunterGandee hunter, loved the story. I have a son with CP. You're a remarkable brother, and an inspiration to many. Keep it up.

@HutchinJax it's for your son too!

@HunterGandee Hey. On behalf of all of us with CP, thank you. You're a credit to humanity; yourself and your brother; pass this on to him.

God bless the young Michigan fan Who walked 40 miles with his little brother on his back. #CerebralPalsySwagger. Go Irish!

This makes me SO PROUD to have CP!http://t.co/n2ATwceWZY We need to raise awareness on Cerebral Palsy. God Bless him! #CerebralPalsySwagger

hunter gandee on next. hunter walked 40 miles with his brother on his back this past weekend #CerebralPalsySwagger pic.twitter.com/j9LqeNIszn

These two brothers were the headline story of the #CerebralPalsySwagger http://t.co/FkDV2gBRPr