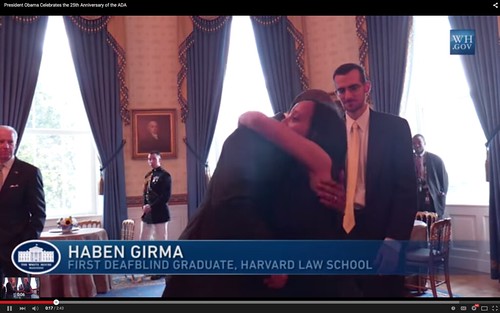 Yesterday was the 25th anniversary of the signing of the American with Disabilities Act. I want to describe three technology events that happened around the theme of celebrating this milestone! These three stories include high speed rail, robots, assistive communication devices, virtual worlds, web accessibility, exoskeletons, 3d printing, and more. That’s the tech. But the touch is just as important, if not more so, and the question of what’s left that needs doing is the idea of defining and meeting our targets. Let’s get started.

First, President Obama celebrated, of course, with many people. One was Haben Girma, the first deaf-blind graduate of the Harvard Law School. The President would type words to talk with her, and she would listen with her hands on a machine that translated the typing into Braille. “I couldn’t type a hug,” he said. 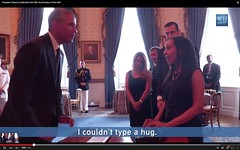 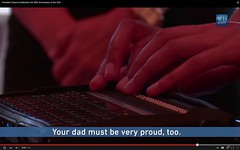 Alice Wong, of the Disability Visibility Project, attended the event through her telepresence robot, and wrote about it later, here. 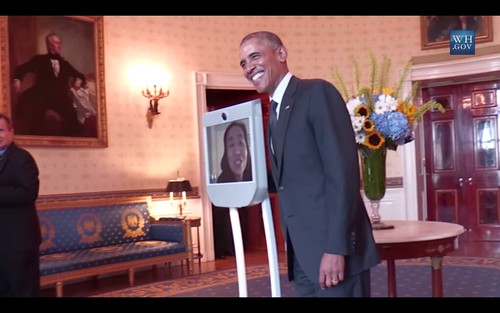 The White House has made available both the highlights video (under 3 minutes) and the complete event (about 1.5 hours).

President Obama Celebrates the 25th Anniversary of the ADA https://www.youtube.com/watch?v=SZCQT-DYVNY

President Obama Speaks at the 25th Anniversary of the Americans with Disabilities Act https://www.youtube.com/watch?v=pUI-TUFlteU

Towards the end of his remarks, President Obama described the how his father-in-law’s experience with multiple sclerosis helped to shape his passion for reducing barriers for persons with disabilities, and his awareness of how access to necessary resources can help people grow into their potential, and how that helps all of us.

“And just an aside on this, for a long time, he would not get a motorized wheelchair because he had gotten this disability at a time when they weren’t available and it was expensive, and they weren’t wealthy, and insurance didn’t always cover it. And it just gave you a sense of — Michelle and I would talk sometimes about how much more he could have done, how much more he could have seen — as wonderful as a dad as he was, and as wonderful as a coworker as he was, he was very cautious about what he could and couldn’t do — not because he couldn’t do it, but because he didn’t want to inconvenience his family and he didn’t want to be seen as somehow holding things up.” Remarks by the President on The Americans With Disabilities Act https://www.whitehouse.gov/the-press-office/2015/07/20/remarks-president-americans-disabilities-act